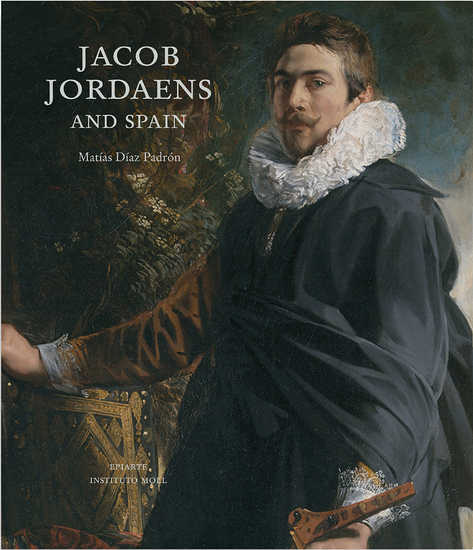 In this book Professor Matías Díaz Padrón focuses on the production of Jacob Jordaens and his relationship with Spain and the territories of the Habsburgs, and those works of his production that have had a close link with the peninsula during the past centuries.

The author analyses more than 110 works of Jordaens from public and private collections, and studies their presence in Spain and their possible influence on the local artists of the moment, through the copies by Spanish painters following the Jordaens´ compositions.

Jordaens’ models were of great interest in 17th century, and some of his desings for tapestries, which are important examples in Spain, let know how the Jordaens painting was admired and recognised by the public, both Spanish and European.

The catalogue of the book starts with the religious painting, that is higher in the catholic Spain than you can image, attending to the protestant religious convictions of the painter. The next chapter is dedicated to the history and mythology subjects, which are very close to Peter Paul Rubens compositions, especially in the series in which they collaborated for the arrival of Cardinal Infant to Antwerp and the Torre de la Parada in Madrid. Finally, the genre and the portrait have exceptional examples, in which Jordaens discovers himself not only as a magnificent physiognomist but also as an exceptional observer of the individual and real life situations.

In the first chapters the reader will discover the Spanish public opinion about Jacob Jordaens at the 17th century, and how it was increased during the 19th and 20th centuries, and the interest for his paintings was grown up.

Jordaens is discovered here as a painter beyond the shadows of Rubens, with his own identity and with formulations that work very well within the artistic market and the tapestry workshops.

This book is full of new and significant contributions taken from archives as well as from the most diverse sources, as records on travel books, auction catalogues or through old photographs.

This thorough research allows the author to draw an eloquent picture of what was, and is, the work of Jacob Jordaens in Spain and Europe. Díaz Padrón offers here new ideas and information which are a solid foundation for those who want to know more in depth about the figure of Jacob Jordaens in the future.